“The Ascent of Unreason”

“I want to make a map of Driftwood.”

Watching Last cough up his wine wasn’t the only reason for Tolyat’s declaration, but he had to admit that was part of the appeal. The man was a guide, and had seen so much, experienced so much, gone so many places, that it was hard to crack his shell of burnt-out weariness. One pretty much had to say something so outrageous it should never be uttered by a sane man.

Driftwood is, as its description might suggest, a setting that tends toward the depressing. But I can only write so many stories about OH MY GOD THE WORLD HAS ENDED before I need a change of pace.

So I give you: a cheerful Driftwood story! One that’s even funny in places. It appeared in issue #104 of Beneath Ceaseless Skies in both text and audio forms, and it was subsequently recorded by Podcastle. It also appears in the Driftwood novel, from Tachyon Publications. 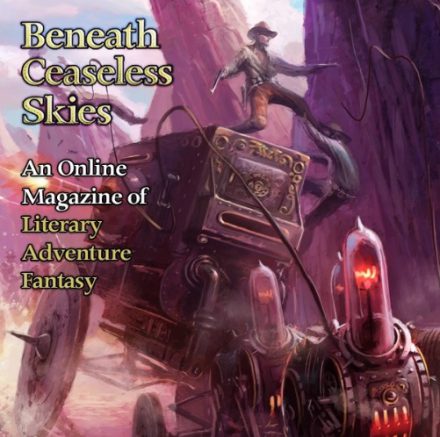 cover art for BENEATH CEASELESS SKIES #104