The tenements presented a blank face to the border: an unbroken expanse of wall, windowless, gapless, resolutely blind to the place that used to be Oneua. Only at the edges of the tenements could one pass through, entering the quiet and sunlit strip of weeds that separated the buildings from the world their inhabitants had once called home.

When Alma Alexander invited me to submit something to a charity anthology whose aim was to benefit refugees, I knew instantly that I would write a Driftwood story.

Because in a sense, everyone in Driftwood is a refugee, or the descendant of one. Their worlds have been destroyed; although the survivors may still live in the remnants of their former homelands, they’re all dealing with the shock and dislocation of that loss. They have to adapt to new neighbors, try to keep their heritage alive, or face the possibility that old traditions aren’t possible anymore and they have to let go. It didn’t take me much effort at all to think up a story concept that would focus on those issues.

“Into the Wind” was published in Children of a Different Sky, with the proceeds going to the International Medical Corps and the Center for New Americans. It also appears in the Driftwood novel, from Tachyon Publications. 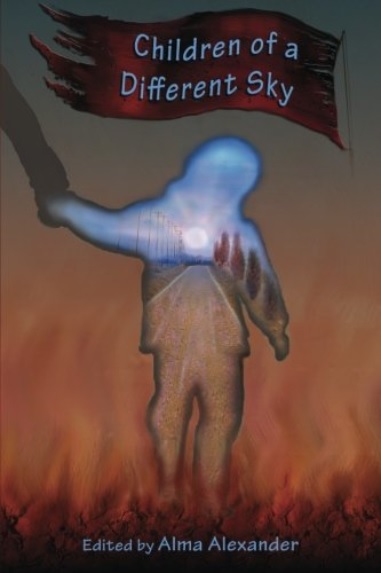 cover art for CHILDREN OF A DIFFERENT SKY