I’ve found out the hard way that it’s remarkably difficult to say anything about Witch that isn’t a spoiler, seeing as how one of the central questions of Warrior was which of the two would survive. Now, that’s less true here, since the cover copy alone is a giant giveaway — I don’t think any copy-writer in the ‘verse could have described the novel in a way that avoided mentioning Mirei. (Not without sucking, anyway.) Nonetheless, I shall attempt to avoid further spoilers — and to hope that the people looking at this page already read the first book.

This novel came about by request of the publisher. When they offered for Warrior (then called Doppelganger), they asked if I would be willing to write a sequel. Much like when someone asks if you’re a god, you say “yes.” Fortunately, I had good reasons for saying yes. Doppelganger in its original incarnation did its best to stand alone, but the fact is that what happened there would undoubtedly have repercussions I was glossing over, so step one was simply to remove the gloss.

Step two was to tease out a few loose threads . . . like the Cousins. They originated in the first book as a random idea I tossed in without really thinking about it, but long before I reached the end, I had to stop and figure out who they were, and where they came from. And as Ashin pointed out, they’re in this up to their eyeballs. I couldn’t deal with them then, but the minute I was asked to write a sequel, I realized this would be my chance.

Step three came from a vague idea I’d had, of writing a short story that took place some years after Doppelganger, when the eldest of the new doppelgangers came to Starfall to meet her other half. That story as envisioned wouldn’t have worked, for half a dozen reasons, but as you can see in the excerpt, a shadow of it survives; the young doppelgangers form a key part of the sequel.

I wrote Witch on a fairly tight schedule, turning in the manuscript about nine months after the deal was closed, and doing most of the writing in three. The purpose of that was to get it on the shelves soon after Doppelganger. At present, it is the last book in this setting, but that may be subject to change.

What’s with the reissue?

Two years after the original release, my publisher decided to repackage the books with covers and titles that made them more obviously a pair. (My heartfelt apologies for the confusion this has created.) The differences between the editions are minimal; the most significant one is the use of the word “triquetra” in place of “triskele.” 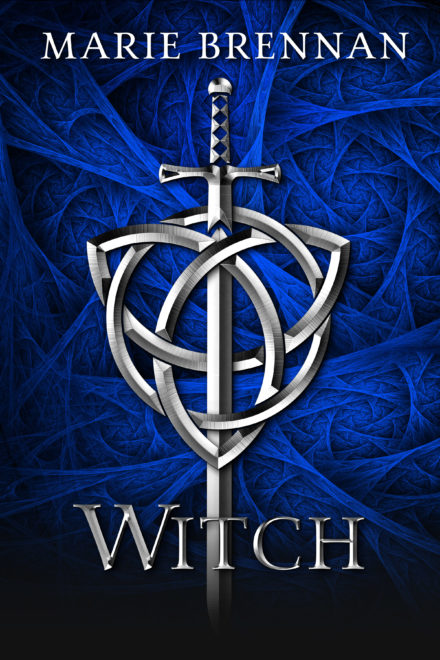