The skies were clear and the winds fair for Plymouth, the Hesperides flying before them like a swan, her wings unfurled from the yardarms and belling out full. On deck, the gusts were strong enough to flick sailors’ tarred tails of hair forward over their shoulders; higher in the rigging, they were strong enough to knock my shoulders forward and test the set of my feet on the rope beneath. I grinned into the afternoon sky, momentarily letting the wind carry my concerns from me, away into the distance, as if to drown them in the deep.

I loved these moments aloft. The mast swayed in great arcs with the pitch and roll of the ship below, which had alarmed me greatly in my midshipman days. Now I found it exhilarating. And it was one of the few places aboard a frigate where one could feel truly alone.

The finished version, for reasons of copy-editing, removed the “u” from the title — but “False Colours” is a historical novelette set during the Napoleonic Wars. The officers of a naval warship go to a house-party, and Hijinks Ensue.

Because the anthology it originally appeared in, Wilful Impropriety: 13 Tales of Society and Scandal (ed. Ekaterina Sedia), was not just about nineteenth-century YA romance, but also about bucking gender conventions, I’ll go ahead and admit the not-terribly-secret secret of this story, which is that our protagonist, Lt. Ravenswood, is actually a woman masquerading as her dead twin brother. She is, in fact, a character I played in a one-shot live-action role-playing game; “False Colours” is partially based on some of the events of that game. I had, with the permission of the other players, made tentative plans to someday expand those events into a novel; when this anthology came up, I leapt on the chance to write a simplified version first. 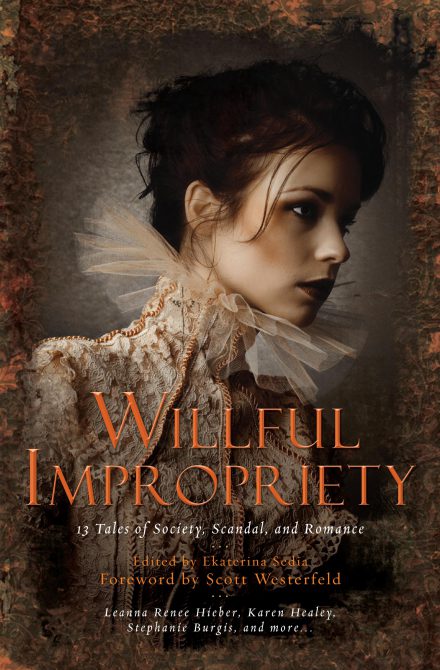