I first heard her fiddling on a corner at Taranabh Fair. There were plenty of buskers around; it was odd that she caught my ear so clearly. I stopped in front of a booth selling woven amulets and looked around, trying to spot the source of the music.

Selling this story was a bit of a challenge, because some people don’t see it as fantasy. The setting it takes place in (the country of Tir Diamh in the Nine Lands) is most definitely fantastical, but little or nothing in this particular tale shows it. This is a story about music, about the artist’s relationship to their work, and the division between high culture and low. One editorial response I got said it could just as easily have been a story about people at a ceilidh in Ireland, and in some respects I guess that’s true; the concept would have been the same. But my Nine Lands stories are all a part of a greater whole, directly or indirectly, and that’s why this one takes place in Tir Diamh: because Tirean and the satire festival, Andris and Ennike and all the rest, may show up in future stories that do include the magic. It stands on its own, but when I write some of the other things I intend to write, the relationship and the ideas set out here are going to matter. (If you think that means Tirean’s going to end up at the festival someday, you’d be right.)

At any rate, it is possible to sell borderline non-fantastical fantasy, in this case to the seventh issue of the Intergalactic Medicine Show.

Unsurprisingly, music was important to this story. The five-beat court waltz wasn’t anything specific, but that notion came out of pieces like “Mars, the Bringer of War” by Gustav Holst and those parts of Andrew Lloyd Webber’s Jesus Christ Superstar that are in 5/4. “Flower Face” is essentially a stand-in for “Dúlamán,” a Celtic song about talking seaweed. But the most important song, the one I had in mind when I wrote the characters playing “Stone the Crows,” comes from the Green Linnet collection Playing with Fire: Contemporary Celtic Instrumentals. Wolfstone has a track on there called “Gillies: The Sleeping Tuna/The Noose and the Gillies,” the second half of which is the closest I can come in real life to what the group is playing in my mind. The track is probably available on other collections or Wolfstone albums, for those who would like to check it out.

“Lost Soul” is now available in my short story collection The Nine Lands. 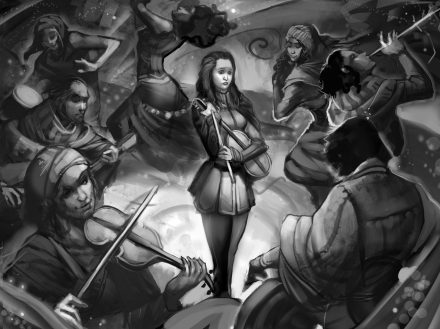